skip to main | skip to sidebar

I thought I'd published the final chapter of this blog over a year ago but as I learn more about my brain I find I want to say more about it.

The process of ignoring the TN so that it would go away was certainly effective and pain is now a thing of the past for me.  Woo Hoo!

As I learn more about how the brain works I understand why ignoring the TN made it go away.

I used to spend a HUGE amount of time thinking about the pain and as a consequence it became a HUGE problem.  This is because the brain is dynamic and anything we spend a lot of time thinking about spreads out into all available spaces and even pushes the things aside that we've ignored lately.  So, as I spent more time concentrating on playing Spider the real estate of my brain was increasingly used for that function.  As the pain eased I was able to concentrate on a wider range of interests and activities and these took up more room in my brain.  The TN became less of a focus and eventually its brain real estate was overwritten by other things.

The explanation I've just given sounds like a casual and easy process but it wasn't that way.  The brain will only rewire with focussed concentration so while it was a simple thing to do it didn't happen overnight.  It took me about 3 months to be finally clear of the pain and at all times I had to maintain my belief that it was working and I wasn't deluding myself that there were improvements along the way.

It doesn't work to try to NOT think of something.  When I say "try not to think of an elephant" you immediately picture one in your mind's eye, right? (Or at least most people do).  The only way to get something out of your head is to replace the thought with something else.  That's where Spider worked for me as a training tool.

There's a far better process that's now available online.  It's a brain exercise system that came out of  research mentioned in The Brain That Changes Itself by Norman Doidge and it's designed to improve all of the brain's cognitive functions.  You can find it at www.brainhq.com

You can sign in to the website as a guest and try out the exercises and if you like it then you can create an account for a small annual fee.  They are still developing more exercises as time goes on.  I'm using it to make sure my brain will get better and better as time goes on.

I won't say this is my last post like I did on the previous one because I may change my mind again. 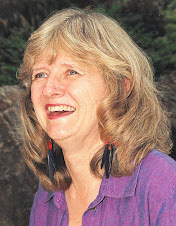 Lena
I dabble in many art forms - painting, assemblage, fibre work, artist books, pottery and papier mache. Being an artist is who I am, not just what I do.